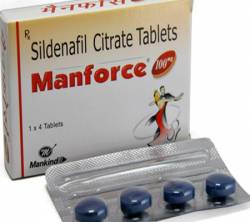 Please login to sign up for product Back in Stock email notifications.

The active ingredient of the medication is Sildenafil citrate that is PDE5 inhibitor. Penile erection is complex physiological process including interaction between psychological, neural, vascular and endocrine factors. During sexual stimulates (sexual arousal) nitrogen oxide is released from the nerve cell and interacts with the enzyme Guanylate cyclase resulting in biosynthesis of Cyclic guanosine monophosphate (cGMP). Cyclic GMP is a second messenger that activates intracellular protein kinases resulting in relaxation of smooth muscles. The relaxation of these muscle in the cavernous body leads to intensification of blood flow. This ultimately causes strong and appropriate erection satisfactory for sexual intercourse. Manforce is indicated for men suffering from erectile dysfunction. The medication is not a sexual enhances and works only in presence of sexual stimulation. Manforce is not indented for use in females.

Manforce comes in the form of tablets which should be taken orally swallowing whole at least 30 minutes before sexual intercourse. The recommended dose for Manforce is 50 mg once daily. In insufficient effect 100 mg of the medication can be used. In patients with liver and kidney diseases Manforce dose should not exceed 25 mg.

Manforce must not be taken in the following conditions: reactions of individual intolerance or reactions of hypersensitivity to sildenafil citrate and components of the medications, males under 18 years of age, females including breastfeeding and pregnant women, severe diseases of the liver such as cirrhosis, hepatic failure, hepatitis, kidney diseases such glomerulonephritis, pyeloneophritis, severe cardiovascular diseases such as heart attacks, strokes, coronary heart disease, angina, heart failure, aortic stenosis, high blood pressure, low blood pressure, blood diseases such as multiple myeloma, sickle cell anemia, leukemia, vision problems such as retinitis pigmentosa, anatomical deformation of the penis such as angulation, Peyronie's disease, or cavernosal fibrosis, simultaneous use with nitrates, alpha-blockers