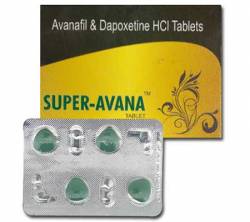 Super Avana is a combination medication containing Avanafil and Dapoxetine which is used to treat Erectile Dysfunction (impotence or ED) as well as premature ejaculation at the same time.

Dapoxetine HCl acts by inhibiting the serotonin transporter, leading to increased serotonin’s action at presynaptic receptors and postsynaptic receptors. Dapoxetine inhibits the ejaculatory expulsion reflex at the supraspinal level by modulating the activity of lateral paragigantocellular nucleus (LPGi) neurons. This causes an increase in pudendal motoneuron reflex discharge (PMRD) latency and it is through this mechanisme of regulating the central nervous system activity that the sense of control increases and premature ejaculation is significantly reduced.

Super Avana acts by inhibiting a specific phosphodiesterase type 5 of an enzyme. Phosphodieterase type 5 is mostly found in the corpus cavernosum of penis but also in other body tissues. The enzymatic inhibition by Super - Avana leads to prolonged and sustained penile erection.

The combination drug Super Avana has a rapid onset of action and starts working in as short as 15 minutes after consumption and it is superior to many other Erectile Dysfunction medications with its dual action.

Super Avana side effects occurring in 2% or more of the patients being treated include headache, dizziness, nausea, diarrhoea, insomnia, fatigue, flushing, nasal congestion, nasopharyngitis, and back pain.